A Cultural Social Networking event to unite students, young professionals, and entrepreneurs from all over the UK. The event also marked the first AGM of Merging Nepsocs’, where the results of the first ever election held to form the inaugural Elected Committee was revealed. This marks a special date in history as it transitioned Merging Nepscos’ on to the next stage as an organisation and a community.

To kick start the event it was only right to welcome the Night band on stage to showcase the musical culture of our country, with a performance so deep that it reminded everyone of their roots and how wonderful it is. Fun fact: Merging Nepsocs managed to book the Night band in the last few days before the event and surprised a lot of organisers and campaigners as well. 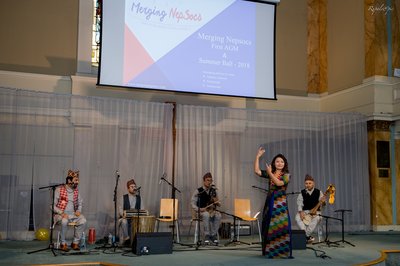 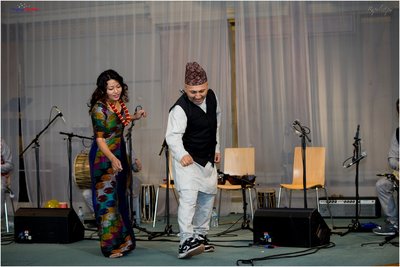 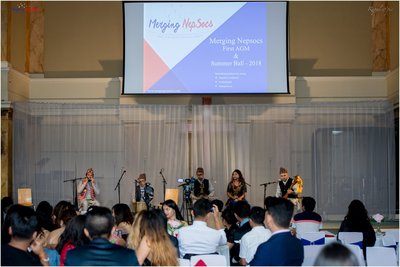 Then it was time for the AGM, where the liner journey of Merging NepSocs’ was revealed to show the amazing work that had been done by all the campaigners and all the events leading up to the event in the ST Mary’s building on the 25th of august 2018.

Then to engage everyone in attendance, people were shuffled around and there were some activities to make everyone network amongst themselves and really bond and unite. Fun fact: Walking around the hall we found out that we had attendees from all the countries that make the United Kingdom. This activity gave opportunity for all the Merging NepSocs’ members to interact with people that otherwise they wouldn’t have been able to connect with and this fulfilled one of the aims that Merging NepoScs’ had planned out.

This was followed by a Speech from the Honourable Ambassador of Nepal to the UK H.E Dr. Durga Bahadur Subedi, congratulations on the success and vision of Merging NepSocs’ and sharing some wisdom and knowledge to all in attendance.

Then it was time that all the candidates and the campaigners had been waiting for, finally the results were to be revealed until all the newly elected committee members were standing on stage to officially start the two year term that they were ready to embark on.

Straight off the bat with no warning, tables started being shuffled and a space was created in the middle of the hall, with curiosity and a sense of adventure in the air the Summer Ball portion of the night started with a Dance Battle of the ages. As each duo started to break it down on the dance floor the crowd went wild stomping, whistling, shouting, cheering each person along creating an atmosphere of energy and unity. Fun Fact: the participants of the dance battle did not have any idea what songs were going to be played but regardless it did not stop them from showing some amazing free style performances.

Followed by a flash mob the energy was kept at an all time high with fellow campaigners dancing to the tunes of summer keeping that atmosphere alive. Then it was time to slow it down with some magical ballroom dance with people taking the hand of their friends, loved ones and just dancing along which transformed the room to the dinning hall in Titanic where Jack and Rose shared their mesmerising dance.

What is an event without some Dall Bhat Power? To keep everyone’s energy and excitement at an all time high there was indeed a need for some delicious food to reenergize everyone for the last stage of the summer ball. After getting everyone in the groove with some cocktail music the crowd was back on their feet grooving when the Bhakta Band got on the stage to rock everyone’s mind out with songs of past and present that everyone can sing along to. As the crowed sang and grooved to the rhythm, DJ Khatra took over to keep the party alive. The energy, the happiness, the unity, the moment screamed of a scene straight out of The Great Gatsby. Summer ball was a night that got the best out of everyone and created an atmosphere of pure enjoyment that will be in the hearts of all those who were there.

The event was a success but with this came a lot of obstacles and lessons for the whole team but in return showed the unity and strength of not only the organisers and campaigners but the whole Merging NepSocs’ family. The event really highlighted the potential for Merging NepSocs’ to do something great and to unite the Nepalese diaspora here in the United Kingdom for the better cause. Going forward this event has helped with better understanding of logistics and organisation of events. The whole Merging Nepsocs’ family can expect a more refined, crowd engaging events in the future.